How Visuals Can Support Arrival Routines in Your Classroom

Starting the morning off on the right foot can help to set the tone for the rest of the school day. You want your students to start on a positive note so they can build on that positive momentum throughout the day. On the other hand, it hurts to see them if they struggle and have a rocky start to the school day. You know how high the risk of spiraling can be as the day goes on.

It is immensely important for teachers to establish strong morning routines and visual supports for students with autism to help them feel confident and successful as soon as they step down off that bus, make their way down that hall and walk through your door. Learners with autism often thrive on the structure that routines provide. So go ahead and make that transition from the bus to the classroom a smooth one. 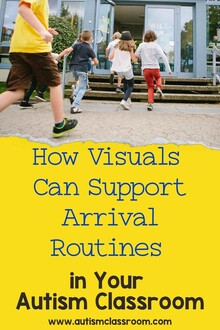 Using visual supports in the classroom is a your ticket to helping students with autism learn new morning routines and gain the confidence needed to practice them independently. Many teachers have found success using visual aids such as icons, symbols and pictures that are exchanged to communicate with students. Multiple and varied visuals provide additional support, increase independence and help to reinforce learning for students with autism.

They also allow them to gain independence as they participate in classroom procedures. There are several ways that teachers can incorporate visuals into their arrival routines.

1. Use social stories to prepare students for a new routine. Before introducing a new arrival routine, it might be helpful to introduce the idea through social stories. During class, you can read stories about students who arrive at school and go through a routine similar to the one that your students will be following. As the story is being read, the you can pause occasionally to show students symbols or images that correspond with the steps of the arrival routine in the story.

2. Use visuals to introduce the routine. You can use visual supports in the classroom to teach each step of the morning routine. A simple arrival routine could include:

Explain each step in this routine by writing out each step on the board and posting a picture next to each step. For example, place a picture of a school bus next to the first step, a picture of the school building next to the second step, and pictures of the classroom and cubbies next to the third and fourth steps. Or, provide a place for studnts to put checkmarks as they complete the steps. These visuals provide students with support as they process the steps of the routine and serve as cues that students can refer to if they get stuck while practicing the steps. Making it portable could increase their impact even more. 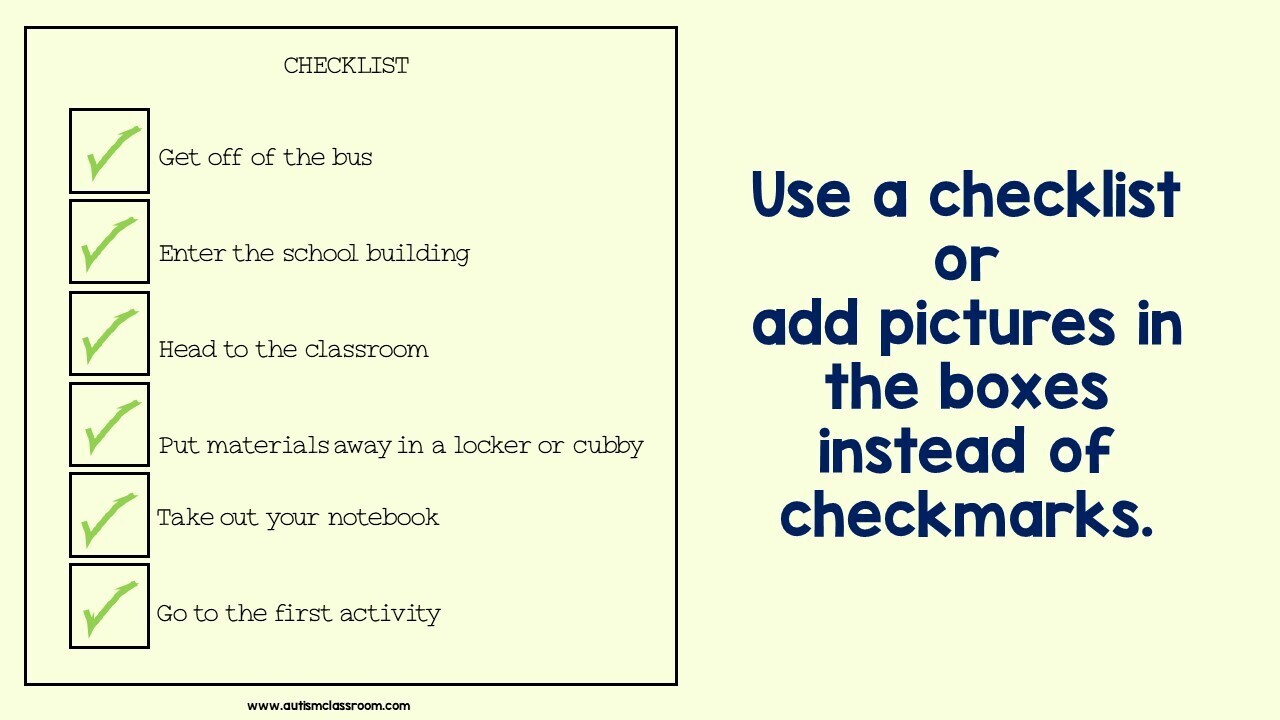 Depending on the level of support the students require, each step of the routine can be further broken down with visuals. For example, the cubby portion of the routine might include visuals and written directions instructing students to walk to their cubbies, put their lunch boxes in their cubbies, put their jackets in their cubbies, and put their backpacks away. The morning meeting portion might include visuals prompting students to walk to the meeting rug, find their spot on the rug, sit quietly on their spot, and read while they wait for the meeting to start. Visual supports for students with autism used in this manner, provide students with a visual map of their morning activities.

3. Use visuals to help with social interaction. Include steps in your morning routines that encourage social interaction. For example, try including steps that ask students to greet their teachers or wave to their friends. These steps would also be taught with the corresponding visual images. Adding morning greetings to the arrival routine helps students with autism to gain daily practice with this social skill and promotes a welcoming classroom environment.

It is also important to note that in order for visuals to be successful the students need to know what each picture means. You can use matching games that ask students to identify the visuals that correspond with each step of their routines. This will help students to learn the arrival routines while encouraging language development.

4. Provide students with visuals to help them practice the morning routines. Once students have been taught the arrival routine, they can be given cards that have the steps written out along with the matching visuals. These cards can be placed in their coat pockets or given to them by their parents in the morning so that they have a visual reminder of what to do when they get to school. Students can refer to the cards and use the pictures to help them successfully follow the steps of the morning routine.

If students are greeted at the bus by an adult, that teacher can have copies of the cards that they use to guide the students through the arrival procedure. Teachers, paraprofessionals and other school staff members, can also wear lanyards with pictures of the routine that they can use to prompt students to follow the routines as they exit the school bus in the morning.

Students who struggle with following the arrival routine may need additional support. Videos are great visual supports in the classroom. Some students might benefit from an instructional video that walks them through the expected procedures. You can create videos of a person going through the different steps of the arrival routine. After each step, pause the video to show the corresponding symbols.

Another way to support students is to create posters with the symbols on them and hang them around the classroom.

If students get stuck during the arrival routine, just point to these posters to help them figure out the next step.

Strong arrival routines can help students have a smooth transition into the classroom and set them up for a successful school day. Visual supports for students with autism can take that idea a step further by giving them the support they need to understand arrival routines and start the day off right. 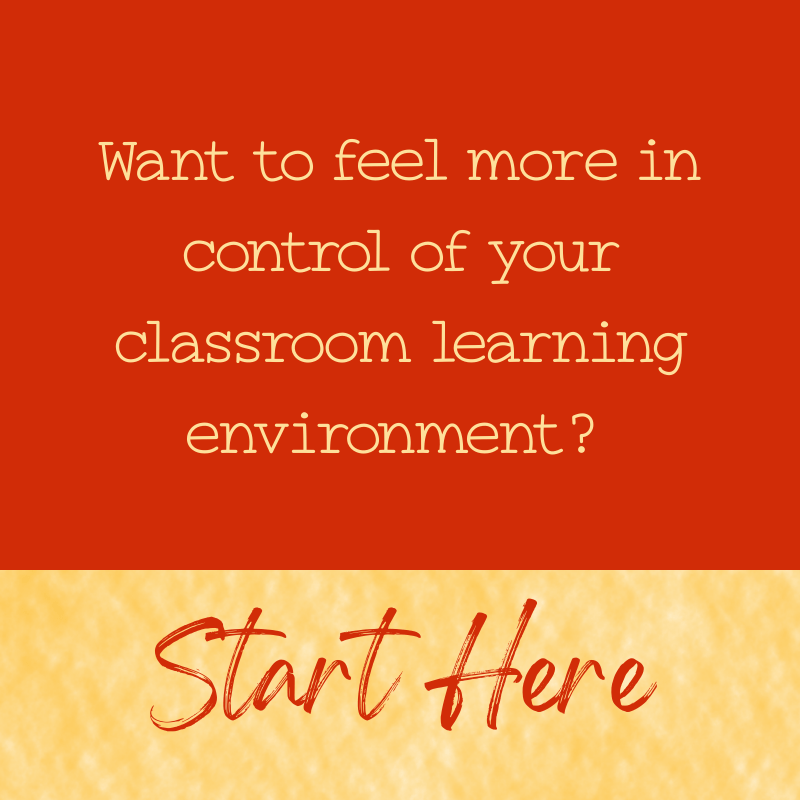 Keep up with our latest posts, new worksheets, guides and more by signing up for our newsletter!